Bob Dawson (1921-2012) was an independently celebrated British sculptor of the 20th Century. Born in Holywell, North Wales, his sculptures are directly linked to memories of his childhood and his intimate relationship to nature. Drawn out of his fascination with the environment, the elemental and maritime became catalysts for his creative process.

During the Burma Campaign (1941-45) he was commissioned into the Indian Army where he served as Captain and fought in Myanmar (Burma). His time in the Indian Army broadened his thinking, and notably expanded his perspectives on the world, which would eventually enrich his artistic practice as a Post-World War II artist. Demobilised at the end of the war in 1946, it was during this period he met his lifelong companion and wife Martha, who was a skilled weaver in her own right. Martha became his inspiration and muse, and he made several sensitive and beautiful portraits of her.

Bob initially, studied at Camberwell School of Art London. During this period he studied under great painters such as Victor Passmore and William Coldstream. However, he found his interests moving towards three-dimensional work, and ended up majoring in sculpture.  He continued his studies at Kennington City and Guilds School of Art (1947-49) and later at the Royal Academy, in Copenhagen, under Professor Utzon Frank (1951-52).

From the very beginning, his works, primarily made in clay and bronze, had a direct relationship to their surroundings. The nature of his sculptures, actively function to alter and permeate the existing environment in which they were placed, creating a new and interactive space, in which the viewer is invited to participate. He often used abstract form to draw analogies between the human body and a myriad of landscapes. Throughout his lifetime, his sculptures continued to evolve, using a range of materials such as bronze, stone and clay in an organic manner; carving them into strangely shifting forms and achieving a complex patina of surfaces.

Bob has had several one-man shows, at the Central Polytechnic, London, the Alfred East Gallery, Kettering, and the Museum and Art Gallery, Northampton but also over the years, he exhibited at a number of galleries: the O’Hana Gallery, The Ewan Phillips Gallery and Grosvenor Gallery in London plus The Royal Academy, and The Welsh Arts Council.

Despite having developed Parkinson’s disease in his later years, he continued to work and took part in Open Studios Northamptonshire. After his death in 2012 his daughter Alison continued to participate in Open Studio showing his works of art and also organised a retrospective exhibition at Corby Art Gallery 2017.  ( his web page shows his works of art plus a video of his studio www.bob-dawson.co.uk). 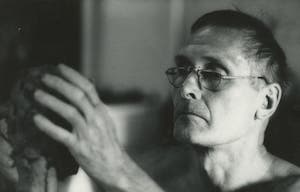 Who else is nearby...

Are you registered with
NOS or East Midlands Art?

We have moved all the admin to the East Midlands Art Site. Please go there by clicking the link below....